Tester Testing / Developer Testing
Nature of job changes the mode of thinking and hence testers think in different mode than the developers. Developer always wants to see his code working properly. So he will test it to check if it’s working correctly.  And tester tests application to make it fail in any way, and smart tester surely will test how application is not working correctly. This is the main difference in developer testing and tester testing.
This can be a big debate. Developers testing their own code – what will be the testing output? All happy endings! Yes, the person who develops the code generally sees only happy paths of the product and don’t want to go in much details.

It’s funny, how almost everywhere developers consider testers as the troublemakers. Actually it’s not their fault, no one like to hear faults in his/her own baby. And same thing which  the testers  are doing, of course intention behind that is to deliver quality output to client. Constantly there is bitterness at some point in the game between these two roles. Wonder why? It’s the genre and responsibility of these two roles. 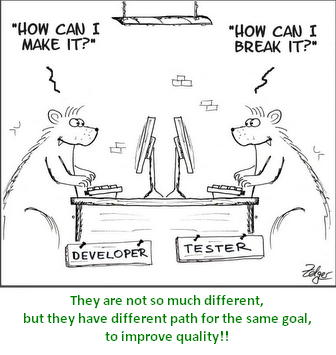 What is your profession?

What do you think about an SQA?